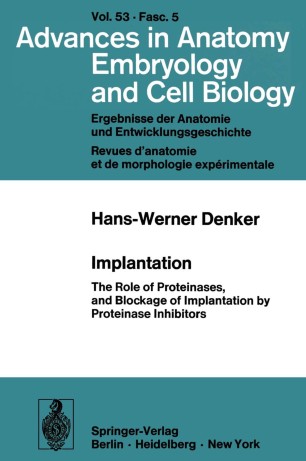 The Role of Proteinases, and Blockage of Implantation by Proteinase Inhibitors

The establishment of the morphologically and physiologically intimate contact be­ tween two genetically different individuals, mother and embryo, which takes place during implantation, has always exerted a fascination on researchers in biology and medicine. Recent years have also seen the beginnings of a more practice-oriented med­ ical interest in this event, as certain methods of contraception whose use is ever in­ creasing, namely intra-uterine devices (IUDs) and post-coital oral contraceptives, are based on it. On one hand, we have fairly well substantiated experimental and clinical evidence that the efficacy of these contraceptives lies with other factors as well, for example their influence on sperm migration and capacitation or their influence on the transportation of the unfertilized egg. On the other hand there appears to be more im­ portance in their influence on the blastocyst and on the early stages of implantation (Carol et aI. , 1973; Duncan and Wheeler, 1975; Hafez and Evans, 1973; Oettel, 1975). These stages in development are characterized by complex interactions between em­ bryo and mother, which have only lately been more exhaustively investigated and which are still subjects of intense research (Beier, 1973, 1974a; Blandau, 1971a; Finn and Porter, 1975; Hafez and Evans, 1973; Steven, 1975). It is expected that insight in­ to the mechanism of the action of postcoital contraceptives and a possible basis for the development of new concepts in contraception can be gained here.