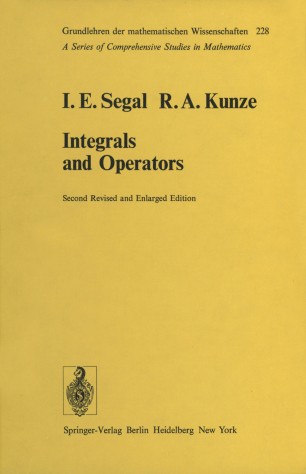 TO THE SECOND EDITION Since publication of the First Edition several excellent treatments of advanced topics in analysis have appeared. However, the concentration and penetration of these treatises naturally require much in the way of technical preliminaries and new terminology and notation. There consequently remains a need for an introduction to some of these topics which would mesh with the material of the First Edition. Such an introduction could serve to exemplify the material further, while using it to shorten and simplify its presentation. It seemed particularly important as well as practical to treat briefly but cogently some of the central parts of operator algebra and higher operator theory, as these are presently represented in book form only with a degree of specialization rather beyond the immediate needs or interests of many readers. Semigroup and perturbation theory provide connections with the theory of partial differential equations. C*-algebras are important in har­ monic analysis and the mathematical foundations of quantum mechanics. W*-algebras (or von Neumann rings) provide an approach to the theory of multiplicity of the spectrum and some simple but key elements of the gram­ mar of analysis, of use in group representation theory and elsewhere. The v vi Preface to the Second Edition theory of the trace for operators on Hilbert space is both important in itself and a natural extension of earlier integration-theoretic ideas.