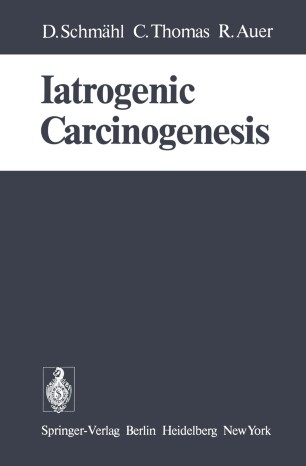 The purpose of this book, which is written mainly for pharmacothera­ pists, is to draw the physician's attentions, through specific examples, to iatrogenic (i.e., diagnostically or therapeutically induced) carcino­ genesis. The book is not intended, however, to arouse public concern. It has been known for some time that each therapeutic measure has a risk-benefit ratio, the estimation of which requires an understanding of carcinogenic side-effects. The number of iatrogenic tumors published so far is not large; however, we assume that there are a number of cases that have not been registered. In the past it was not generally recognized that medical treatment might involve carcinogenic risks; moreover, various therapeutic measures are often used simultaneously so that it may be difficult to trace the cause of tumor formation to a specific agent. Animal experiments and clinical observations during the past few years have contributed to our knowledge of the possible hazards of drugs. We have compiled the most important literature on the subject without, however, attempting completion. The present book may help the pharmacotherapist balance the benefit of a drug against its potential risk, and is thus consistent with the medical principle of nil nocere. We thank Mrs. M. Gomille (Institut fur Toxikologie und Chemothera­ pie, Deutsches Krebsforschungszentrum, Heidelberg) for her help in the preparation of the manuscript.