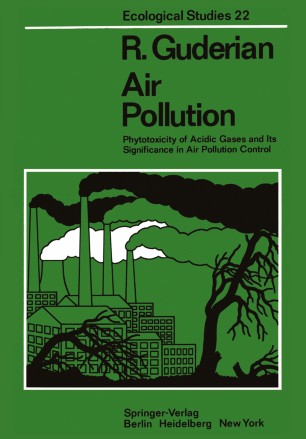 Phytotoxicity of Acidic Gases and Its Significance in Air Pollution Control

Emissions of gaseous air pollutants have increased in the last years in spite of increased controls and concern for air quality. Predictions of future development also indicate that a further increase in emissions must be expected. From an extensive analysis of fuel use in conventional power plants in industry and for domestic heating, Brocke and Schade (1971) and Schade (1975) predict that sulfur dioxide (S02) emissions in the Federal Republic of Germany will increase from '3. 5 million t in 1969, over 4. 2 million t in 1973, to 4. 6 million t in 1980. Rasch (1971) predicts that emission of hydrogen chloride (HCI) from burning of wastes will increase from a present 8000 t/year to about 100000 t in 1980. Emission of gaseous fluoride compounds, in North Rhine Westphalia alone, are expected to increase from 7500 t in 1969 to 8800 t in 1985 (MAGS, 1972). Similar predic­ tions have also been made in the USA (Heggestadt and Heck, 1971). A doubling of S02 emissions from oil and particularly coal-fired power plants is expected between 1960 and 1980 (Wood, 1968; Lewis et aI. , 1974). When it is considered that total control of air pollutants is technically and especially economically impossible, it is important that, in the future, emissions are controlled within a technical and economic framework to such an extent that ambient pollutant concentrations near the ground present no hazard to man or his environment (BImSchG, 1974).