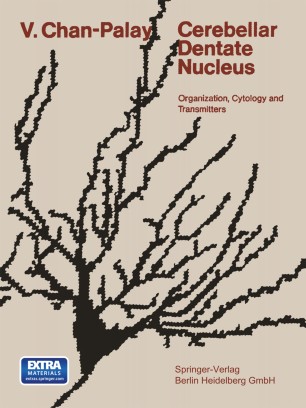 Recent physiologic investigations have shown that the deep cerebellar nuclei may play an important role in the initiation and monitoring of skilled move­ ments. Much of this physiologic work has been carried out in the absence of a secure foundation in neuroanatomical information. Although the main sources of the afferent fibers and the major terminations of the efferent fibers related to these nuclei have been known for many years, remarkably little information about the organization of the nuclei themselves has been collected. The kinds of nerve cells, their arrangement within the nuclei, the patterns of their dendritic arborizations, the distribution of incoming fibers among the neurons, the relationship between the outgoing nerve fibers and the nerve cells from which they originate - these and many other morphologic features were either unknown or only superficially explored. In fact, so little was known about the deep cerebellar nuclei when I began to work on this subject that the investigations reported here are virtually without antecedents, a refreshing change from the cerebellar cortex which has been repeatedly and exhaustively surveyed. My studies on the cerebellar nuclei began in the spring of 1972. They were initiated with the intent of applying the principles of analysis that had been developed for the cerebellar cortex to a different but related part of the brain.