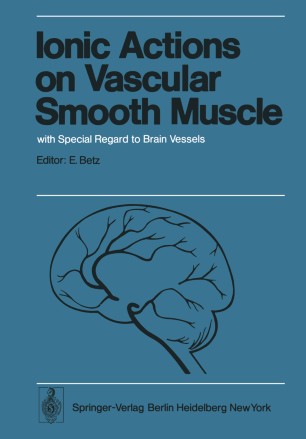 with Special Regard to Brain Vessels

This book contains the contributions and discussions of the second symposium on vascular smooth muscles held in Ttibingen in February, 1976. It provides an up-to-date review of the role of ions in the trans­ mission of signals from the perivascular space to the contractile ele­ ments of the smooth muscle cells. The various aspects are mainly discussed from a functional point of view and only few contributions concern the morphologic variations of cells .during varying ion activity. Special emphasis was placed on the significance of ion variations in the cerebral tissue and their rela­ tion to metabolic and nervous control of the brain vessels. It could be seen in this symposium that new techniques enabled the in­ vestigators to make considerable progress in the understanding of the actions and the interactions of ions on the membranes and on the inter­ nal structures of the smooth muscle cells if one compares the findings with the results of the previous symposium held in Ttibingen in 1972. It became evident that the insight into ionic actions enables the de­ velopment of powerful tools to be utilized in future therapy of dis­ turbances of local blood flow regulation. The participants of the symposium render thanks to the Dr. Thiemann GmbH in Ltinen, which supported the symposium and this publication in a generous way. Finally it is a pleasure of the Editor to thank the members of the Physiological Institute of Ttibingen for their encouragement in the ar­ rangement of the meeting.