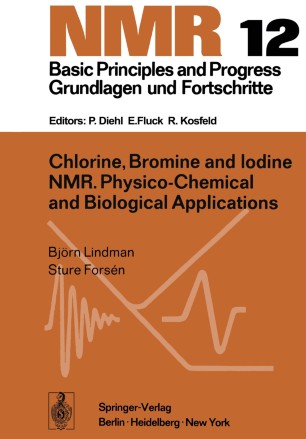 The increasing interest in NMR spectroscopy of what in some confer­ ences in this field is commonly termed "other nuclei" is unmistakable. Chemists and biologists who employ NMR spectroscopy to study their problems have, however, been somewhat reluctant to study nuclei with electric quadrupole moments. These nuclei frequently give rise to broad NMR signals, sometimes too broad to be detectable with ordinary high resolution NMR spectrometers. Spectrometers that could cope with broad NMR signals of low intensity, "wide-line" spectrometers, have been available since the mid 1950:s but it appears that most of these instruments ended up in physical laboratories where the research was primarily directed towards solid state problems. The study of quadrupolar nuclei can provide unique and very valuable information on a variety of physico-chemical and biological systems. For one thing the relaxation of quadrupolar nuclei is in many ways easier to interpret than the relaxation of non-quadrupolar nuclei, since the former is in many cases caused by purely intramolecular interactions modulated by the molecular motion. Studies of quadrupolar relaxation have therefore furnished important information about molec­ ular reorientation and association in liquids and have played - and will certainly play for many years - an important role in testing new theoretical models of molecular motion in liquids.