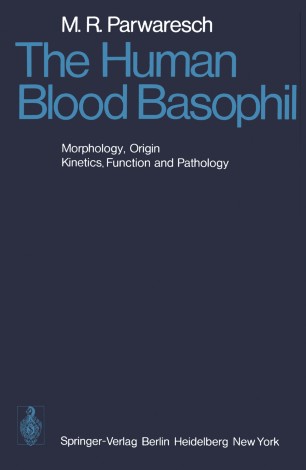 The blood basophils lead a shadowy existence in the field of hematology, even now, 100 years after their discovery by PAUL EHRLICH. In clinical medicine they were hardly noticed for many decades, since they occur in such small numbers in the blood that small and moderate variations in the basophil count were not detectable with common count­ ing methods. This situation has changed since the in­ troduction of direct counting methods. It was noticed, for example, that the blood basophil count is increased in hy­ perlipemia. In the field of pathology the blood basophil was prac­ tically overlooked until recently. This was due to the fact that with common fixations in aqueous solutions the granules dissolve, so that the cells can no longer be stained specifically and therefore escape observation. This problem was solved through special fixing solu­ tions. However, interest in the blood basophils remain­ ed confined to only a few research groups.