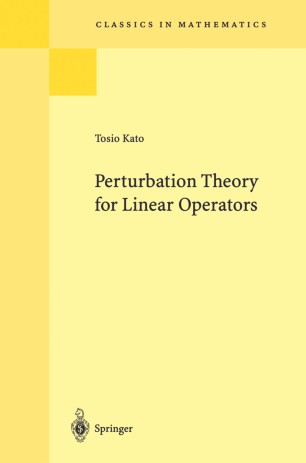 Part of the Classics in Mathematics book series (volume 132)

In view of recent development in perturbation theory, supplementary notes and a supplementary bibliography are added at the end of the new edition. Little change has been made in the text except that the para­ graphs V-§ 4.5, VI-§ 4.3, and VIII-§ 1.4 have been completely rewritten, and a number of minor errors, mostly typographical, have been corrected. The author would like to thank many readers who brought the errors to his attention. Due to these changes, some theorems, lemmas, and formulas of the first edition are missing from the new edition while new ones are added. The new ones have numbers different from those attached to the old ones which they may have replaced. Despite considerable expansion, the bibliography i" not intended to be complete. Berkeley, April 1976 TosIO RATO Preface to the First Edition This book is intended to give a systematic presentation of perturba­ tion theory for linear operators. It is hoped that the book will be useful to students as well as to mature scientists, both in mathematics and in the physical sciences.

Kato was a pioneer in modern mathematical physics. He worked in te areas of operator theory, quantum mechanics, hydrodynamics, and partial differential equations, both linear and nonlinear.

"The monograph by T. Kato is an excellent textbook in the theory of linear operators in Banach and Hilbert spaces. It is a thoroughly worthwhile reference work both for graduate students in functional analysis as well as for researchers in perturbation, spectral, and scattering theory.
In chapters 1, 3, 5 operators in finite-dimensional vector spaces, Banach spaces and Hilbert spaces are introduced. Stability and perturbation theory are studied in finite-dimensional spaces (chapter 2) and in Banach spaces (chapter 4). Sesquilinear forms in Hilbert spaces are considered in detail (chapter 6), analytic and asymptotic perturbation theory is described (chapter 7 and 8). The fundamentals of semigroup theory are given in chapter 9. The supplementary notes appearing in the second edition of the book gave mainly additional information concerning scattering theory described in chapter 10.
The first edition is now 30 years old. The revised edition is 20 years old. Nevertheless it is a standard textbook for the theory of linear operators. It is user-friendly in the sense that any sought after definitions, theorems or proofs may be easily located. In the last two decades much progress has been made in understanding some of the topics dealt with in the book, for instance in semigroup and scattering theory. However the book has such a high didactical and scientific standard that I can recomment it for any mathematician or physicist interested in this field.
Zentralblatt MATH, 836
Buy options