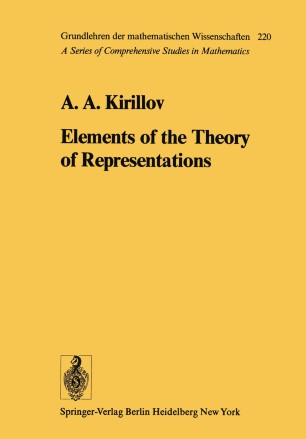 Elements of the Theory of Representations

The translator of a mathematical work faces a task that is at once fascinating and frustrating. He has the opportunity of reading closely the work of a master mathematician. He has the duty of retaining as far as possible the flavor and spirit of the original, at the same time rendering it into a readable and idiomatic form of the language into which the translation is made. All of this is challenging. At the same time, the translator should never forget that he is not a creator, but only a mirror. His own viewpoints, his own preferences, should never lead him into altering the original, even with the best intentions. Only an occasional translator's note is permitted. The undersigned is grateful for the opportunity of translating Professor Kirillov's fine book on group representations, and hopes that it will bring to the English-reading mathematical public as much instruction and interest as it has brought to the translator. Deviations from the Russian text have been rigorously avoided, except for a number of corrections kindly supplied by Professor Kirillov. Misprints and an occasional solecism have been tacitly taken care of. The trans­ lation is in all essential respects faithful to the original Russian. The translator records his gratitude to Linda Sax, who typed the entire translation, to Laura Larsson, who prepared the bibliography (considerably modified from the original), and to Betty Underhill, who rendered essential assistance.