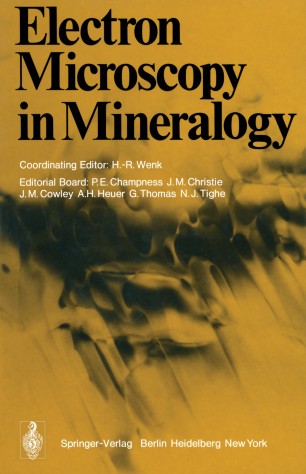 During the last five years transmission electron microscopy (TEM) has added numerous important new data to mineralogy and has considerably changed its outlook. This is partly due to the fact that metallurgists and crystal physicists­ having solved most of the structural and crystallographic problems in metals­ have begun to show a widening interest in the much more complicated structures of minerals, and partly to recent progress in experimental techniques, mainly the availability of ion-thinning devices. While electron microscopists have become increasingly interested in minerals (judging from special symposia at recent meetings such as Fifth European Congress on Electron microscopy, Man­ chester 1972; Eight International Congress on Electron Microscopy, Canberra 1974) mineralogists have realized advantages of the new technique and applied it with increasing frequency. In an effort to coordinate the growing quantity of research, electron microscopy sessions have been included in meetings of mineralogists (e. g. Geological Society of America, Minneapolis, 1972, American Crystallographic Association, Berkeley, 1974). The tremendous response for the TEM symposium which H. -R. Wenk and G. Thomas organized at the Berkeley Conference of the American Crystallographic Association formed the basis for this book. It appeared useful at this stage to summarize the achievements of electron microscopy, scattered in many different journals in several different fields and present them to mineralogists. A group of participants as the Berkeley symposium formed an Editorial Committee and outlined the content of this book.