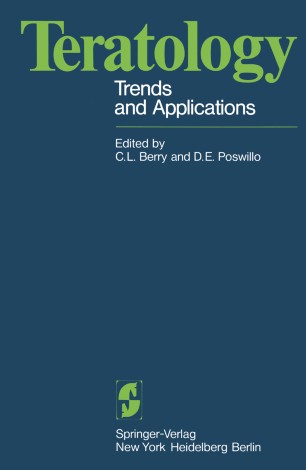 In the fifteen years since the thalidomide disaster teratology has become a science in its own right, distinct from its progenitors, experimental embryology and develop­ mental biology, but bearing many of the familiar features of both parents. In this growth period there have been contributions from many different scientific disciplines as diverse as molecular biology and obstetrics, which have united in the field of study of congenital malformations. Scientists in academic departments, government research institutes and industrial pharmacology have all explored ways of evaluating the potential of drugs and chem­ icals to damage the embryo; strict methods of screening for teratogenicity have be­ come mandatory in most parts of the world. Despite a wealth of basic information in the fields of genetics and embryology, there is little concrete knowledge of the causal mechanisms of malformation in Man, and even less concerning the relevance to Man of those laboratory and animal tests which decide the fate of potentially useful drugs. It is timely, therefore, that in 1975 a group of young and active sci­ entists and clinicians concerned with the broader implications of teratology should review the past and look to the future of this emerging speciality. In this volume the editors have blended the opinions of teratologists; their message presages change in many of the old and accepted areas of investigative teratology.