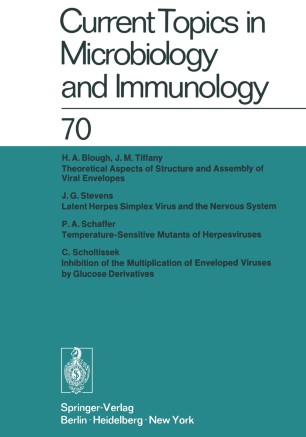 The processes involved in herpesvirus replication, latency, and oncogenic transformation, have, in general, been rather poorly defined. A primary reason for this is the size and complexity of the herpesvirus genome. Undoubtedly, a better understanding of the functions of the viral genome in infected and transformed cells will be achieved through studies with temperature-sensitive (ts) mutants of herpesviruses since, theoretically, any essential gene function can be affected by mutants of this type. A. The Herpesviruses A consideration of the genetic analysis of members of the herpesvirus group necessitates a description, albeit brief, of the properties of the group and, most importantly, of their genetic material. The herpesviruses comprise a group of relatively large (100-150 nm), enveloped viruses. The envelope surrounds an icosahedral capsid enclosing a core which contains double­ stranded DNA (ROIZMAN, 1969). The group is thus defined on the basis of a common virion morphology. In addition to a common structure, members of the group share a number of biological properties such as a similar replicative cycle, the ability to cause latent and chronic infections, and the ability to induce antigenic modifications of infected cell membranes. Several herpes­ viruses have been associated recently with malignancies in man and animals (KLEIN, 1972). Herpesviruses are ubiquitous and have been described in over 30 different species (HUNT and MELENDEZ, 1969; WILDY, 1971; FARLEY et aI. , 1972; KAZAMA and SCHORNSTEIN, 1972; NAHMIAS et aI. , 1972; ROlZMAN et aI. , 1973). Their widespread occurrence in nature suggests a common ancestor.