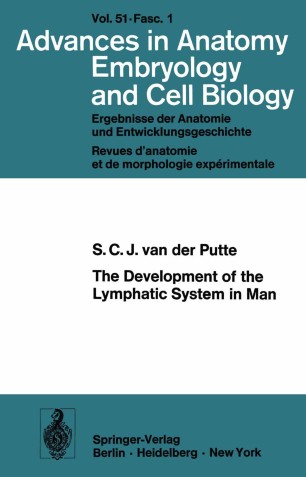 The Development of the Lymphatic System in Man

When Budge in the eighth decade of the nineteenth centlll'Y, started his investigations into the origin and development of the lymphatic system, he probably did not expect that these would be the starting-point for disputes that would continue well into our time. But rather than by his results were these disputes intensified by the controversial conclusions of some papers published by Gulland (1894), Ranvier (1897) and Sala (1900), and above all by some new investigations by Sabin (1902-1913) and Huntington (1908-1914) during the first decades of the twentieth century. The most important controversial point was the difference in opinion about the origin of the lymphatic system. An extensive review of the relevant literature is found in O. F. Kampmeier's book: "Evolution and Comparative Morphology of the Lymphatic System"; Thomas, Springfield, U.S.A. (1969). Whereas some investigators were of the opinion that the lymphatic system was formed from the venous system, there were many others, who believed that this system originates from confluent spaces in the mesenchyme and secondarily communicates with the veins. The most prominent advocate of the first mentioned opinion was Sabin (1902-1913). She believed that the lymphatics are formed by a process of sprouting from the large central veins in a limited number of definitely localized areas, but that these sprouts demonstrate almost immediately their own lymphatic character. From these sprouts separate primordia develop at first; these enlarge, confluence and form new sprouts which grow out into more peripheral parts of the embryo.