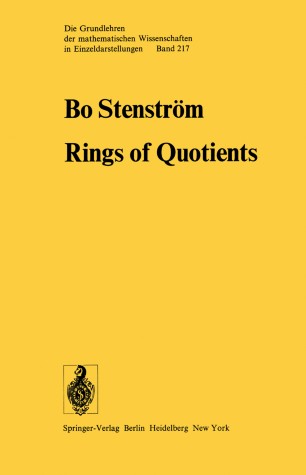 An Introduction to Methods of Ring Theory

The theory of rings of quotients has its origin in the work of (j). Ore and K. Asano on the construction of the total ring of fractions, in the 1930's and 40's. But the subject did not really develop until the end of the 1950's, when a number of important papers appeared (by R. E. Johnson, Y. Utumi, A. W. Goldie, P. Gabriel, J. Lambek, and others). Since then the progress has been rapid, and the subject has by now attained a stage of maturity, where it is possible to make a systematic account of it (which is the purpose of this book). The most immediate example of a ring of quotients is the field of fractions Q of a commutative integral domain A. It may be characterized by the two properties: (i) For every qEQ there exists a non-zero SEA such that qSEA. (ii) Q is the maximal over-ring of A satisfying condition (i). The well-known construction of Q can be immediately extended to the case when A is an arbitrary commutative ring and S is a multiplicatively closed set of non-zero-divisors of A. In that case one defines the ring of fractions Q = A [S-l] as consisting of pairs (a, s) with aEA and SES, with the declaration that (a, s)=(b, t) if there exists UES such that uta = usb. The resulting ring Q satisfies (i), with the extra requirement that SES, and (ii).