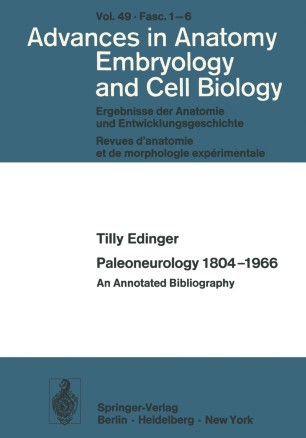 Dr. Tilly Edinger's first published paper dealt with a brain cast-in more exact terms an endocast of the cranial cavity-of Noth08auru8, a Triassic relative of the plesiosaurs. With this she embarked on a working lifetime of devotion to paleoneurology, a field of study that she was to transform. A daughter of the famous neurologist Ludwig Edinger, it was appropriate as well as fortunate that her early interest in fossil vertebrates should have become focused upon the recovery of such information concerning the history of the central nervous system as could be obtained from fossil material. Her father evidently had no direct influence upon her choice of· this then obscure and difficult subject, although within the family circle she presumably absorbed from him some appreciation of neoneurology. Indirectly, however, through his accumulation in Frankfurt of an outstanding collection of recent brains, he provided the comparative material essential to her studies during the years she spent there. Early in her career she published Die FOBsilen Gehirne (1929). Here was gathered together for the first time nearly all the widely scattered information on the topic. It had an immediate effect. As one author justly remarked, this "invaluable review . . . serves not only as a basis for continuing and systematizing research on brain casts but also as an indication of the more serious gaps in present knowledge" (Simpson, 1933). The bibliography appended to it listed 250 titles. A bibliography she published in 1937 included 160 additional titles.