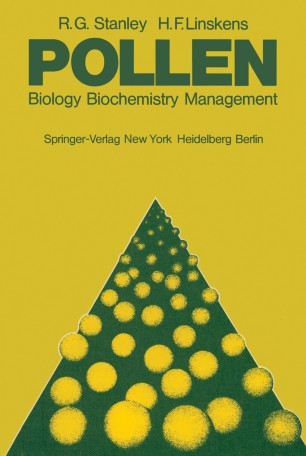 Pollen transmits the male genetic material in sexual reproduction of all higher plants. This same pollen is also well suited as a research tool for studying many patterns of plant and animal metabolism. In addition, an increased knowledge of pollen may help plant breeders accelerate efforts to improve the world's food and fiber supply. This volume focuses upon pollen biology and chemistry; it attempts to inte­ grate these facts with management practices involved in pollen applications. People have long been involved with pollen. Pollen applications are recorded in the rites of ancient civilizations (see Frontispiece). From the earliest times many benefits have been attributed to the inclusion of pollen in man's diet; also, since the mid-19th century air-borne pollen has been recognized as detrimental to many people's health. Disciplines concerned with man's cultural history and the earth's changing ecology find pollen a particularly useful and accessible tool. Identifiable parts of pollen have survived over 100 million years. But most books dealing with pollen are generally concerned with the identification of the plant source, an aspect of the science of palynology; other books emphasize the natural vectors transmit­ ting pollen, the pollination mechanisms. Very few works include the biochem­ istry or biology of pollen. Yet extensive studies by physicians, as well as plant breeders and apiculturists, have contributed a sizeable body of research relating to pollen.