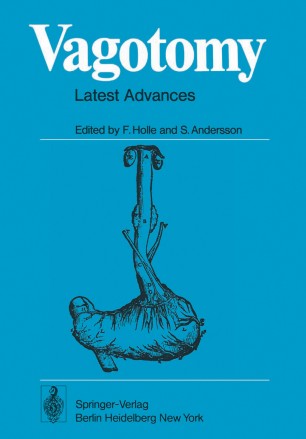 This monograph is a summary of observations collected over the past ten years on vagal denervation of the stomach and the functional pathology of the vagotomized stomach. It is primarily a continuation of the work we (Holle and Heinrich, 1954) began with fundectomy - the prototype of proximal dener­ vation of the stomach. This was the starting point for the develop­ ment of selective proximal vagotomy (SPV). Between 1961 and 1964 the SPY technique was developed to the extent that it could be applied clinically from January 1,1964. Like most clinical innovations, the development took place in several stages. A report on the first 235 surgical cases (1961-1967) appeared in 1968 in F. Holle's Special Surgery of the Stomach, pp. 508-509, and in 1969 in Surgery of the Stomach and Duodenum by Harkins and Nyhus, 2nd edition, pp. 629-634. Since that time it has been possible to demonstrate on the basis of 1200 operated cases as well as animal experiments that the new technique we introduced represents a successful, nonresecting surgical treatment of gastric and duodenal ulcers. It is important to have a long series of clinical cases from the same source, because it is not until a large number of individual observations have been collected concern­ ing complications of diagnosis, indications and technique that is it possible to analyse the relationships between them.