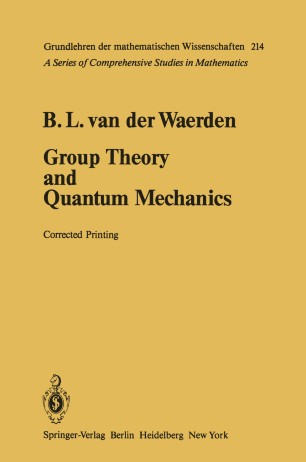 The German edition of this book appeared in 1932 under the title "Die gruppentheoretische Methode in der Quantenmechanik". Its aim was, to explain the fundamental notions of the Theory of Groups and their Representations, and the application of this theory to the Quantum Mechanics of Atoms and Molecules. The book was mainly written for the benefit of physicists who were supposed to be familiar with Quantum Mechanics. However, it turned out that it was also used by. mathematicians who wanted to learn Quantum Mechanics from it. Naturally, the physical parts were too difficult for mathematicians, whereas the mathematical parts were sometimes too difficult for physicists. The German language created an additional difficulty for many readers. In order to make the book more readable for physicists and mathe­ maticians alike, I have rewritten the whole volume. The changes are most notable in Chapters 1 and 6. In Chapter t, I have tried to give a mathematically rigorous exposition of the principles of Quantum Mechanics. This was possible because recent investigations in the theory of self-adjoint linear operators have made the mathematical foundation of Quantum Mechanics much clearer than it was in t 932. Chapter 6, on Molecule Spectra, was too much condensed in the German edition. I hope it is now easier to understand. In Chapter 2-5 too, numerous changes were made in order to make the book more readable and more useful.