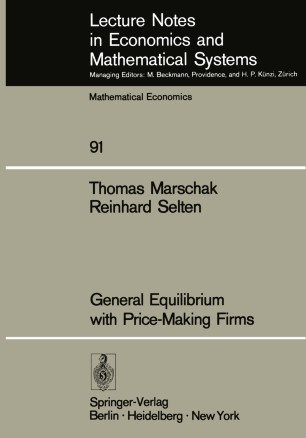 Motivation. That elegant fiction the competitive equilibrium seems still to dominate the frontiers of theoretical microeconomics. We may think of it in a general way as a state of affairs wherein economic agents, responding "rationally" to annoWlced prices, make choices which are consistent and feasible. The prices may also be described as "taken": for one reason or another the agents who respond to them consider them as given. The existence of such a state, its optimality, its robustness against free bargaining among agents when there are many of them, its Wliqueness, its stability when price displacements evoke specified adjustments--all these issues have been studied, and continue to be studied in a variety of settings. Slowly the equilibrium investigated begins to incorporate public goods, externalities of certain kinds, differences in agents' information, and infinitely many time periods. The appeal of such results need not be belabored: the equilibrium studied may sustain an optimal resource allocation, and when it does it sus­ tains it in a manner that appears to be informationally efficient and to accord well with individual incentives. Therefore it is important to extend the circumstances under which an equilibrium exists, under which it sustains opti­ mality, and under which it survives displacements as well as free bargaining among agents.