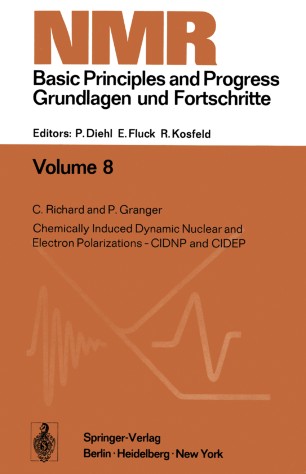 Anomalous electron-spin state populations in the Electron Paramagnetic Re­ sonance (EPR) spectra of radicals formed during radio lysis experiments were observed in 1963 by FESSENDEN and SCHULER [170a]. This phenomenon did not receive much attention at the time. In 1967, BARGON, FISCHER, and JOHNSEN [5] and independently WARD and LAWLER [7,8] reported a similar phenomenon for Nuclear Magnetic Resonance (NMR) spectra taken during radical reactions: emission or enhanced absorption, or both. The earliest attempts to explain this new NMR phenomenon treated these effects in a way similar to that of Dynamic Nuclear Polarization (DNP) or the Overhauser effect. Although the polarization has a completely different origin, DNP gave its name to this effect: Chemically Induced Dynamic Nuclear Polariza­ tion (CIDNP). [The name Chemically Induced Dynamic Electron Polarization (CIDEP) was introduced later by analogy with CIDNP]. After the initial publica­ tions, all the new data demonstrated that the first theory could not be correct. In 1969, a new theory was proposed by CLOSS [18] and independently by KAPTEIN and OOSTERHOFF [23] and called the radical-pair theory. This mechanism was proposed to account for the observations of polarization in both NMR and EPR. The radical-pair theory is based on weak interactions in a pair of radicals: the strength of interaction between the electronic states of the radicals depends in particular on the nuclear-spin states.