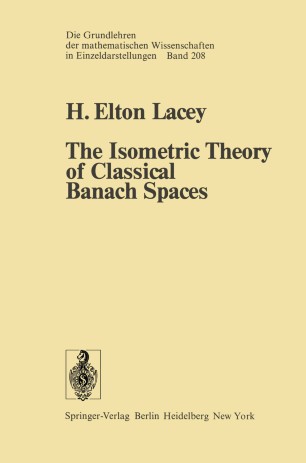 The purpose of this book is to present the main structure theorems in the isometric theory of classical Banach spaces. Elements of general topology, measure theory, and Banach spaces are assumed to be familiar to the reader. A classical Banach space is a Banach space X whose dual space is linearly isometric to Lp(j1, IR) (or Lp(j1, CC) in the complex case) for some measure j1 and some 1 ~ p ~ 00. If 1 < p < 00, then it is well known that X=L (j1,IR) where 1/p+1/q=1 and if p=oo, then X=L (v,lR) for q j some measure v. Thus, the only case where a space is obtained which is not truly classical is when p = 1. This class of spaces is known as L - 1 predual spaces since their duals are L type. It includes some well known j subclasses such as spaces of the type C(T, IR) for T a compact Hausdorff space and abstract M spaces. The structure theorems concern necessary and sufficient conditions that a general Banach space is linearly isometric to a classical Banach space. They are framed in terms of conditions on the norm of the space X, conditions on the dual space X*, and on (finite dimensional) subspaces of X. Since most of these spaces are Banach lattices and Banach algebras, characterizations among theses classes are also given.