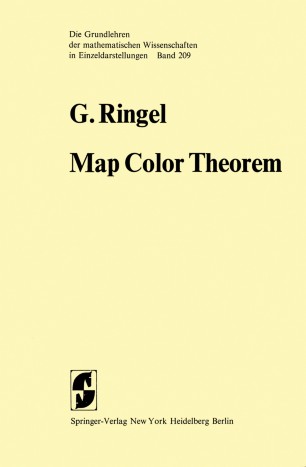 In 1890 P. J. Heawood [35] published a formula which he called the Map Colour Theorem. But he forgot to prove it. Therefore the world of mathematicians called it the Heawood Conjecture. In 1968 the formula was proven and therefore again called the Map Color Theorem. (This book is written in California, thus in American English. ) Beautiful combinatorial methods were developed in order to prove the formula. The proof is divided into twelve cases. In 1966 there were three of them still unsolved. In the academic year 1967/68 J. W. T. Youngs on those three cases at Santa Cruz. Sur­ invited me to work with him prisingly our joint effort led to the solution of all three cases. It was a year of hard work but great pleasure. Working together was extremely profitable and enjoyable. In spite of the fact that we saw each other every day, Ted wrote a letter to me, which I present here in shortened form: Santa Cruz, March 1, 1968 Dear Gerhard: Last night while I was checking our results on Cases 2, 8 and 11, and thinking of the great pleasure we had in the afternoon with the extra­ ordinarily elegant new solution for Case 11, it seemed to me appropriate to pause for a few minutes and dictate a historical memorandum. We began working on Case 8 on 10 October 1967, and it was settled on Tuesday night, 14 November 1967.