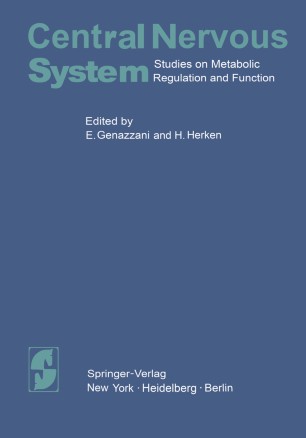 Studies on Metabolic Regulation and Function

This book is based on the Symposium "Metabolic Regulation and Functional Activity in the Central Nervous System" which was held on September 16 and 17, 1972, at Saint­ Vincent (Aosta)/Italy, and was sponsored by the Accademia di Medicina di Torino with the scientific cooperation of the Istituto di Farmacologia, Universita di Torino, and the Pharmakologisches Institut der Freien Universitat Berlin. Its purpose was to give a greater number of scientists from different countries an opportunity to report their latest results under a heading concerning general relationships between metabolism and function. We quite deliberately refrained from pursuing the partly heterogenous subjects into details. Thus, the organizers hoped to be able to interest a greater circle of readers for the manifold subjects from various fields dealing with the investigation of metabolic processes in the central nervous system. The discussion remarks to the lectures could not be considered for printing. The Accademia di Medicina di Torino and all others concerned do not only thank Dr. R. Di Carlo and other members of the Istituto di Farmacologia, Universita di Torino, for the excellent work they performed in preparing this Symposium, but also the Amministrazione Regionale della Valle di Aosta and SIT A V di Saint-Vincent for their generous support and their kind hospitality which made the stay at Saint-Vincent most agreeable for all participants.