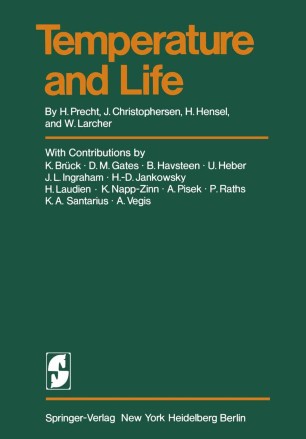 The book by PRECHT, CHRISTOPHERSEN and HENSEL referred to in the text as the first edition was published in German in 1955 with the title Temperatur und Leben. The present volume is a revised version of this book, constructed along the same lines, but it cannot properly be called the second edition because it is in English. Yet another difference is in the number of contributors, who now include two microbiologists, seven botanists, three zoophysiologists, one biochemist, and three human physiologists. We have again endeavored to treat as many problems as possible but the main theme is still the adaptation of organisms to changing temperatures. What was conceived as a chapter on physical and chemical aspects by Professor L. LUMPER of GieBen will be published later as a supplementary volume. A special effort has been made to cover the copious literature published since 1955 though not, of course, exhaustively. The various chapters were completed at different times and those written earlier have footnotes referring to subsequent literature. The botanical contributions by W. LARCHER, K. NAPP-ZINN and A. PISEK were translated by Mrs. JOY WIESER; Dr. J. M. AUGENFELD was the translator of those on poikilotherms by H. D. JANKOWSKY, H. LAUDIEN and H. PRECHT as well as of those on homeotherms by H. HENSEL, K. BRUCK and P. RATHS. The section on limiting temperatures by H. PRECHT was translated by HAZEL PROSSER. We are grateful to them for undertaking this work.