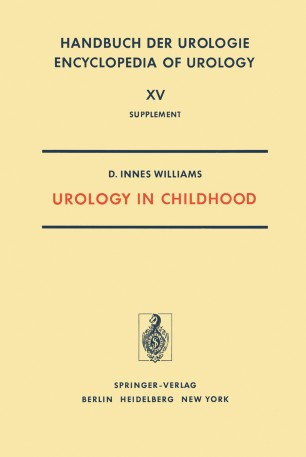 Volume XV "Urology in Childhood" was written in 1956/57 and was the first in the series of the Encyclopedia of Urology to appear. This present volume has been constructed as a supplement and the original intention was to deal only with those subjects in which there have been significant advances during the intervening sixteen years. As the work has proceeded, however, it has become evident that there is no aspect of paediatric urology which has not been developed, and no topic which has not been illuminated by many contributions to the literature. Indeed, there has been such a copious flow of publications devoted to children's urinary tract disease that a full review is no longer possible within the compass of a volume of this size: the decision as to what should be left out has therefore been a matter of the greatest difficulty. The choice has been inevit­ ably arbitrary and many omissions are regretted. The attempt has been made, however, to report the most notable developments of the subject, and perhaps the greatest change in the practice of paediatric urology has been the full integra­ tion with paediatric nephrology. The team approach to infant disease in particular has led to greatly improved results. I have been fortunate to have Dr. T. M.