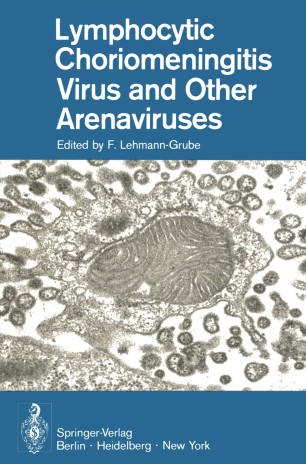 Lymphocytic Choriomeningitis Virus and Other Arenaviruses

Four decades ago, lymphocytic choriomeningitis virus was discovered, at about the same time and independently, in 3 different localities in the U.S.A. Armstrong and Lillie encountered the agent in a monkey when they passaged a recent isolate of the St. Louis encephalitis virus; Rivers and Scott isolated 5 strains from patients with meningitis; and Traub revealed the virus in a colony of albino mice. Already in these first isolations mice were incriminated, and later observa­ tions proved beyond doubt that M. musculus is the principal reservoir of the virus in nature. For some time LCM virus was regarded as the sole etiologic agent of Wallgren's "meningite aseptique aigue". Soon, however, it became clear that Wallgren's syndrome had a multitude of causes, among which the LCM virus was of little relevance, and in subsequent years it disappeared from the sight of most viro­ logists. Indeed, it might have fallen into oblivion had it not been for Erich Traub who, practically all by himself, continued to investigate the intricate relationship between this virus and its natural host, the common house mouse.