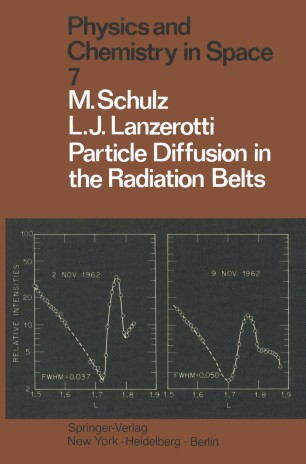 Particle Diffusion in the Radiation Belts

Part of the Physics and Chemistry in Space book series (SPACE, volume 7)

The advent of artificial earth satellites in 1957-58 opened a new dimension in the field of geophysical exploration. Discovery of the earth's radiation belts, consisting of energetic electrons and ions (chiefly protons) trapped by the geomagnetic field, followed almost immediately [1,2]' This largely unexpected development spurred a continuing interest in magnetospheric exploration, which so far has led to the launching of several hundred carefully instrumented spacecraft. Since their discovery, the radiation belts have been a subject of intensive theoretical analysis also. Over the years, a semiquantitative understanding of the governing dynamical processes has gradually evol­ ved. The underlying kinematical framework of radiation-belt theory is given by the adiabatic theory of charged-particle motion [3J, and the interesting dynamical phenomena are associated with the violation of one or more of the kinematical invariants of adiabatic motion. Among the most important of the operative dynamical processes are those that act in a stochastic manner upon the radiation-belt particles. Such stochastic processes lead to the diffusion of particle distributions with respect to the adiabatic invariants. The observational data indicate that some form of particle diffusion plays an essential role in virtually every aspect of the radiation belts.