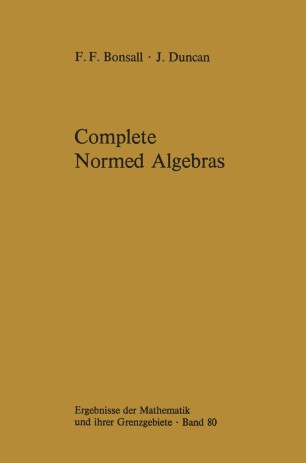 The axioms of a complex Banach algebra were very happily chosen. They are simple enough to allow wide ranging fields of application, notably in harmonic analysis, operator theory and function algebras. At the same time they are tight enough to allow the development of a rich collection of results, mainly through the interplay of the elementary parts of the theories of analytic functions, rings, and Banach spaces. Many of the theorems are things of great beauty, simple in statement, surprising in content, and elegant in proof. We believe that some of them deserve to be known by every mathematician. The aim of this book is to give an account of the principal methods and results in the theory of Banach algebras, both commutative and non­ commutative. It has been necessary to apply certain exclusion principles in order to keep our task within bounds. Certain classes of concrete Banach algebras have a very rich literature, namely C*-algebras, function algebras, and group algebras. We have regarded these highly developed theories as falling outside our scope. We have not entirely avoided them, but have been concerned with their place in the general theory, and have stopped short of developing their special properties. For reasons of space and time we have omitted certain other topics which would quite naturally have been included, in particular the theories of multipliers and of extensions of Banach algebras, and the implications for Banach algebras of some of the standard algebraic conditions on rings.