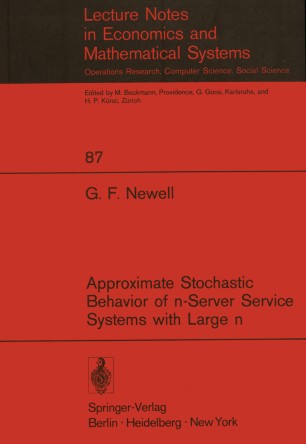 For many stochastic service systems, service capacities large enough to serve some given customer demand is achieved simply by providing multiple servers of low capacity; for example, toll plazas have many toll collectors, banks have many t- lers, bus lines have many buses, etc. If queueing exists and the typical queue size is large compared with the number n of servers, all servers are kept busy most of the time and the service behaves like some "effective" single server wit:l mean se.- vice time lin times that of an actual server. The behavior of the queueing system can be described, at least approximately, by use of known results from the much studied single-channel queueing system. For n» 1 , however, (we are thinking p- ticularlyof cases in which n ~ 10), the system may be rather congested and quite sensitive to variations in demand even when the average queue is small compared with n. The behavior of such a system will, generally, differ quite significantly from any "equivalent" single-server system. The following study deals with what, in the customary classification of queueing systems, is called the G/G/n system; n servers in parallel with independent s- vice times serving a fairly general type of customer arrival process. rhe arrival rate of customers may be time-dependent; particular attention is given to time - pendence typical of a "rush hour" in which the arrival rate has a single maximum possibly exceeding the capacity of the service.