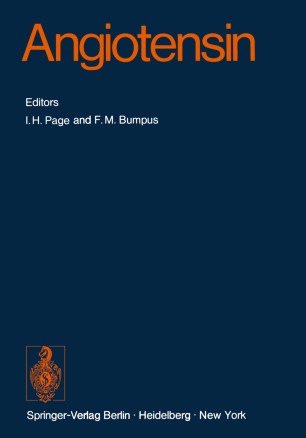 The history of arterial hypertension is both long and short; long, since BRIGHT (1827) first related hardness of the pulse to hardness of the kidneys and hyper. trophy of the heart; short in that modern research began in the late twenties. Most of what we know of these diseases has been discovered in the past fifty years. The modern story should have begun in 1897 when an extract of kidney was shown to be pressor. But little was done with knowledge until about 1929 when the relationship of this kidney extract called "renin" to hypertension was pos· tulated. The pressor effects were, however, unlike most of those seen with sub· stances such as epinephrine or vasopressin. Plasma was required for action of renin and the active substance appeared to be protein. In 1939, it was shown that renin was not in itself a pressor substance but rather a proteolytic enzyme which produced a powerful pressor substance acting on a substrate synthesized by the liver. Later it was noted that the first definable step after the formation of this peptide was cleaving of the decapeptide which had little or no demonstrable activity, with loss of two amino acids to form the octapeptide called "angiotensin". Within a decade synthesis was achieved which made the substance available for world·wide study.