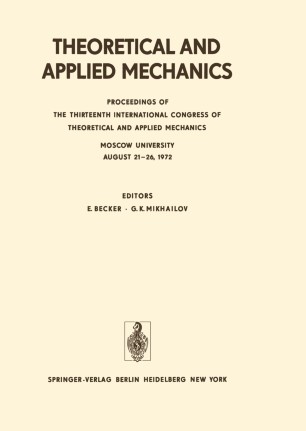 The Thirteenth International Congress of Theoretical and Applied Mechanics was held in Moscow from Monday, 21 August, to Saturday, 26 August 1972. About 2500 participants from 37 countries all over the world attended the congress that was convened by the Congress Committee of the International Union of Theoretical and Applied Mechanics. The local or­ ganization lay in the hands of the Organizing Committee, established by the USSR National Committee on Theoretical and Applied Mechanics. The USSR Academy of Sciences rendered partial financial help to the organization of th8 congress. The Organizing Committee was assisted by the Institute of Problems of Mechanics of the USSR Academy of Sciences, by the Research Institute for Mechanics of Moscow University, and by the Computing Center and the Institute of Applied Mathematics of the USSR Academy of Sciences. The Bureau of IUTAM had allocated a considerable sum for partial financial support of young scientists attending the congress. The Thirteenth Congress was officially opened on Monday morning at the Kremlin Palace of Congresses by Academician N. 1. Muskhelishvili, President of the Congress, and Professor W. T. Koiter, President of IUTAM. Greeting addresses were offered by: Mr. K. N. Rudnev, Minister, member of the Council of Ministers of the USSR, Academician M. V. Keldysh, President of the USSR Academy of Sciences, Mr. L. N.