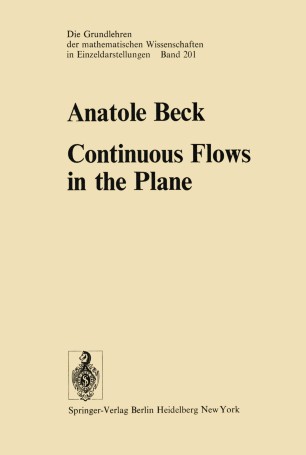 Continuous Flows in the Plane

Topological Dynamics has its roots deep in the theory of differential equations, specifically in that portion called the "qualitative theory". The most notable early work was that of Poincare and Bendixson, regarding stability of solutions of differential equations, and the subject has grown around this nucleus. It has developed now to a point where it is fully capable of standing on its own feet as a branch of Mathematics studied for its intrinsic interest and beauty, and since the publication of Topological Dynamics by Gottschalk and Hedlund, it has been the subject of widespread study in its own right, as well as for the light it sheds on differential equations. The Bibliography for Topological Dyna­ mics by Gottschalk contains 1634 entries in the 1969 edition, and progress in the field since then has been even more prodigious. The study of dynamical systems is an idealization of the physical studies bearing such names as aerodynamics, hydrodynamics, electrodynamics, etc. We begin with some space (call it X) and we imagine in this space some sort of idealized particles which change position as time passes.