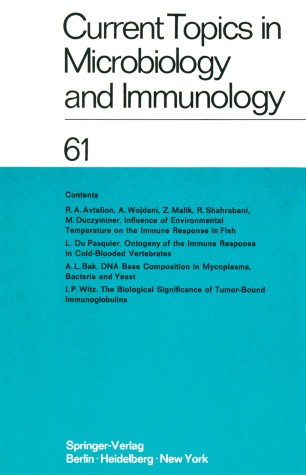 At the end of the last century and the beginning of this century, the prob­ lems of immunity in lower vertebrates and the influence of environmental temperature attracted attention for the first time (ERNST, 1890; WIDAL and SICARD, 1897; METCHNIKOFF, 1901). However, relatively little work has been done on this subject until recently. The early investigators were chiefly in­ terested in the immuno-pathological problems. They immunized various species of lower vertebrates essentially with bacterial vaccines; agglutinating, neutralizing and protective antibodies were detected in their blood. The in­ fluence of environmental temperature on the immune response was investigated, since this subject represented great economical and theoretical importance. Epizootic diseases were observed to occur in relation to the cold season of the year, when the decrease or spontaneous increase of water temperature occurred (SCHAPERCLAUS, 1965; BESSE et al. , 1965; KLONTZ et al. , 1965 WOOD,1966). The immunological deficiency of fish, caused by their natural or experimental stay in cold water, is now evident for both humoral and cellular immunity. In this review we will focus on two points: We shall attempt (1) to explain the mechanism by which the environmental temperature influences the immune resistance of fish to pathogens, (2) to determine the chronological location of this temperature-sensitive stage in the process of antibody formation, and to make some approaches to the general antibody formation mechanism.