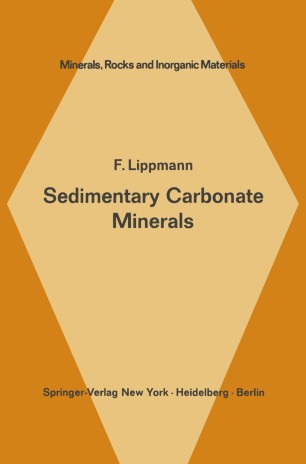 and their identification obviates individual thermochemical studies on every genus. The stability relations among sedimentary carbonate minerals are now more or less well known. The common rock-forming minerals cal­ cite and dolomite are indeed stable phases in the pertinent systems. Most other carbonate minerals of similar composition which are known to occur in the younger sediments are metastable with respect to calcite, dolomite, and magnesite. This implies that the sedimentation of carbon­ ates is determined only in part by stability relations. Kinetic factors, which allow the formation of metastable minerals, appear to be more important. Although the diagenetic transformations leading to stable minerals take place by virtue of thermodynamic requirements, the reac­ tions themselves are triggered by kinetic factors as well. Some of the reactions leading from metastable to stable carbonate assemblages are susceptible to simulation in the laboratory; others (e. g. dolomitization) appear to be so slow that they can be studied only in analogous systems characterized by reasonable reaction rates. In all attempts to explain the possible mechanisms of such reactions, we must consider the crystal structures of the final products as well as of the starting materials. This is another viewpoint from which mineralogy is important to carbonate petrology, if we regard the crystal chemistry of minerals as a part of mineralogy. A certain parallelism with clay mineralogy suggests itself.