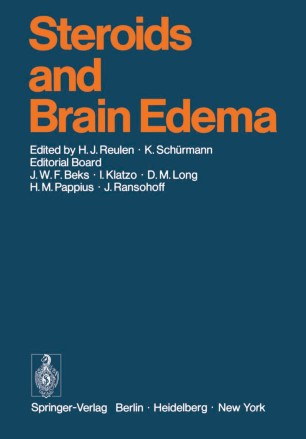 The control of brain edema is still one of the major problems in surgical and conservative treatment of various cerebral lesions. Many attempts have been made to develop methods for reducing the high mortality associated with brain edema. Mter many years of using hypertonic solutions it can be stated that this type of therapy has not yielded satisfactory results. During recent years increasing evidence has been accumulated on the efficacy of steroids on brain edema. Steroids were reported to result in rapid relief of signs and symptoms of increased intracranial pressure and neurological dysfunction accompanying cerebral edema. It was the aim of this workshop to evaluate the effect of corticosteroids on brain edema as an advance in therapy. It was hoped that this could be achieved by a multi­ disciplinary approach. Though, the volume contains the contributions of various experts - internists, neurochemists, neurologists, neuropathologists, neurosurgeons, pharmacologists, physiologists - who have added considerable experimental and clin­ ical evidence on the action of steroids on brain edema. New pathophysiological aspects regarding the mechanisms underlying the formation and resolution of brain The effectiveness of corticosteroid therapy in various forms edema are presented. of clinical and experimental brain edema, e. g. accompanying brain tumors, head injury, spinal cord injury, cerebrovascular lesions, etc. as well as dosage and duration of treatment are critically discussed.