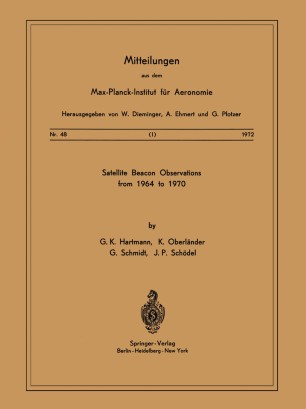 Satellite Beacons Observations from 1964 to 1970

From October 1964 to May 1969 the 40 MHz, 41 MHz, and 360 MHz signals of the satellite Explo­ 0 0 rer 22, were recorded at Lindau (51,650 N; 10,125 E). The Faraday effect recordings at 40 MHz and 41 MHz and Dispersive-Doppler-effect recordings at 40 MHz and 360 MHz were used to calculate the ionospheric electron content up to 1000 km. The mean electron content for 1 hour periods over a period 0 of three months as obtained at 51. 6 N geographic latitude as derived from various evaluation methods is presented. Furthermore, the relevant critical frequency FOF2 is displayed. A similar presentation was chosen for the calculated slabthickness data. For one specific case the daily variation of the electron con­ tent as determined by measurements was compared with a relevant theoretical curve. The agreement, was fairly good. Due to technical problems the beacons were switched off in 1969. Now the five orbiting FS-NNSS satellites provide a good possibility to determine the ionospheric electron content up to 1100 km fairly accurately by evaluating the Dispersive Doppler recordings obtained at 150 MHz and 400 MHz. The amplitude recordings of the 40 MHz and 41 MHz signals of Explorer 22 were furthermore used for amplitude scintillation studies. Simultaneous Dispersive-Doppler-recordings enabled in part also pha­ se scintillation studies. Phase and amplitude recordings were compared.