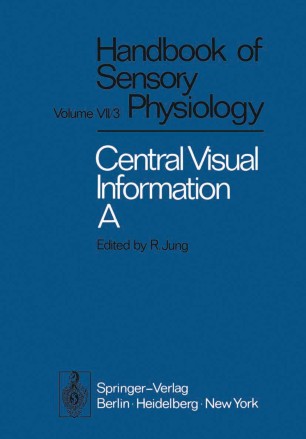 Part of the Handbook of Sensory Physiology book series (SENSORY, volume 7 / 3 / 3 A)

The present volume covers the physiology of the visual system beyond the optic nerve. It is a continuation of the two preceding parts on the photochemistry and the physiology of the eye, and forms a bridge from them to the fourth part on visual psychophysics. These fields have all developed as independent speciali­ ties and need integrating with each other. The processing of visual information in the brain cannot be understood without some knowledge of the preceding mechanisms in the photoreceptor organs. There are two fundamental reasons, ontogenetic and functional, why this is so: 1) the retina of the vertebrate eye has developed from a specialized part of the brain; 2) in processing their data the eyes follow physiological principles similar to the visual brain centres. Peripheral and central functions should also be discussed in context with their final synthesis in subjective experience, i. e. visual perception. Microphysiology and ultramicroscopy have brought new insights into the neuronal basis of vision. These investigations began in the periphery: HARTLINE'S pioneering experiments on single visual elements of Limulus in 1932 started a successful period of neuronal recordings which ascended from the retina to the highest centres in the visual brain. In the last two decades modern electron­ microscopic techniques and photochemical investigations of single photoreceptors further contributed to vision research.