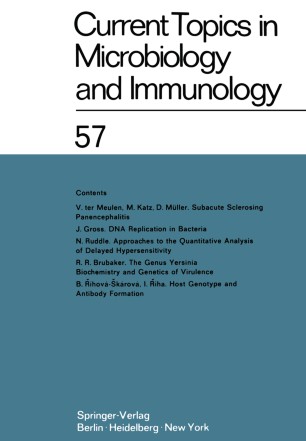 Phenomena as diverse as tuberculin sensitivity, delayed sensitivity to soluble proteins other than tuberculin, contact allergy, homograft rejection, experimental autoallergies, and the response to many microorganisms, have been classified as members of the class of immune reactions known as delayed or cellular hypersensitivity. Similarities in time course, histology, and absence of detectable circulating immunoglobulins characterize these cell-mediated immune reactions in vivo. The state of delayed or cellular hypersensitivity can be transferred from one animal to another by means of sensitized living lymphoid cells (CHASE, 1945; LANDSTEINER and CHASE, 1942; MITCHISON, 1954). The responsible cell has been described by GOWANS (1965) as a small lymphocyte. Passive transfer has also been achieved in the human with extracts of sensitized cells (LAWRENCE, 1959). The in vivo characteristic of delayed hypersensitivity from which the class derives its name is the delayed skin reaction. When an antigen is injected intradermally into a previously immunized animal, the typical delayed reaction begins to appear after 4 hours, reaches a peak at 24 hours, and fades after 48 hours. It is grossly characterized by induration, erythyma, and occasionally necrosis. The histology of the delayed reaction has been studied by numerous investigators (COHEN et al. , 1967; GELL and HINDE, 1951; KOSUNEN, 1966; KOSUNEN et al. , 1963; MCCLUSKEY et al. , 1963; WAKSMAN, 1960; WAKSMAN, 1962). Initially dilatation of the capillaries with exudation of fluid and cells occurs.