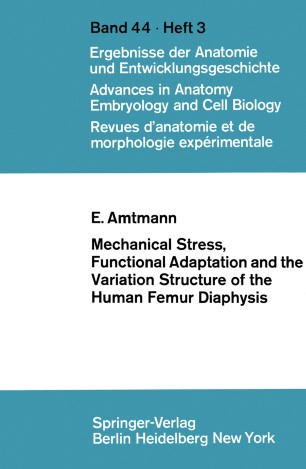 Mechanical Stress, Functional Adaptation and the Variation Structure of the Human Femur Diaphysis

According to the classical theory of functional structure of bone which was developed by J. Wolff (1884, 1892) and W. Roux (1895) following the investigations of the functional architecture of the substantia spongiosa by H. von Meyer (1867), bone is "functionally" laid down in gross form as well as in minute architecture in accordance with the "maximum-minimum-law". As a result of functional adaptation, a maximum of efficiency is achieved with a minimum of material (Kummer, 1962a). In this sense functional adaptation is a reaction of adaptation of the idiotype-within the bounds of the reaction norm-to a changed internal environment, that is in this case an adaptation to changed mechanical stresses. 1. The Formation of the Normal Femur Shape The heredity basis of shape characteristics of human femora is really unknown. Identical twins show a significant lower variability of length of femur than binovular twins. Population variability of length of femur due to heritability may exceed twice the variability due to environmental factors (Knussmann, 1968). A significant part of the total variation of femur shape characteristics remains therefore unexplained supposing that the sources of variation due to heritability and environmental factors are also nearly the same for the other traits.