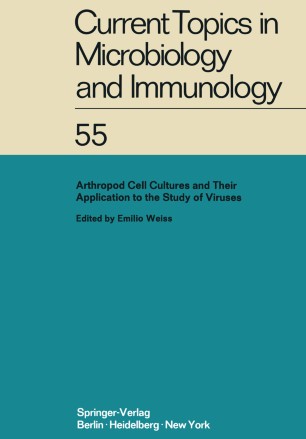 Arthropod Cell Cultures and Their Application to the Study of Viruses

To lose is human, to win is fortune, but to try is our destiny. EARL C. SUITOR, JR. The idea of a Symposium on "Arthropod Cell Cultures" started in July of 1969 shortly after the untimely death of our colleague, EARL C. SUITOR, JR. , at the age of 38. At first we thought an afternoon or evening session would be sufficient, but we were soon convinced that the scope of the Symposium should be greatly enlarged. Interest in this topic was increasing at an astonishing rate. Since EARL SUITOR had made a distinct imprint in this new field, many scientists who knew him well or just casually wished to honor him in this manner. EARL SUITOR was born and raised in New England and received a B. S. degree in bacteriology from the University of Massachusetts in 1952. As a spirited young man, he enlisted in the U. S. Navy to see the world. Instead, he was assigned for most of his four-year "hitch" to the Naval Medical Research Institute. I met him there in 1954, an enthusiastic and imaginative young fellow with many interests, an avid reader of the classics, an occasional writer of poetry, who blended his interest in scientific literature with that of Science Fiction. In 1956, EARL left the Navy to attend George Washington University, where he earned an M. S. degree in 1958 and a Ph. D. degree in 1963.