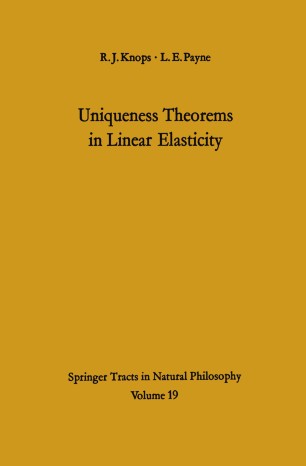 The classical result for uniqueness in elasticity theory is due to Kirchhoff. It states that the standard mixed boundary value problem for a homogeneous isotropic linear elastic material in equilibrium and occupying a bounded three-dimensional region of space possesses at most one solution in the classical sense, provided the Lame and shear moduli, A and J1 respectively, obey the inequalities (3 A + 2 J1) > 0 and J1>O. In linear elastodynamics the analogous result, due to Neumann, is that the initial-mixed boundary value problem possesses at most one solution provided the elastic moduli satisfy the same set of inequalities as in Kirchhoffs theorem. Most standard textbooks on the linear theory of elasticity mention only these two classical criteria for uniqueness and neglect altogether the abundant literature which has appeared since the original publications of Kirchhoff. To remedy this deficiency it seems appropriate to attempt a coherent description ofthe various contributions made to the study of uniqueness in elasticity theory in the hope that such an exposition will provide a convenient access to the literature while at the same time indicating what progress has been made and what problems still await solution. Naturally, the continuing announcement of new results thwarts any attempt to provide a complete assessment. Apart from linear elasticity theory itself, there are several other areas where elastic uniqueness is significant.