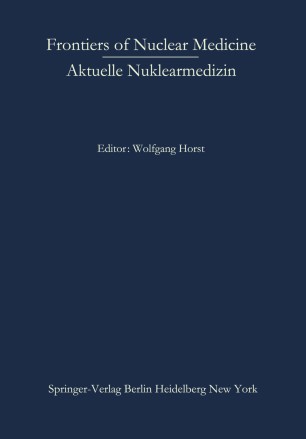 That nuclear medicine has advanced so far and so fast is due in no small measure to GEORGE VON HEVESY. His work on radioactive indicator technique laid the foundation on which this young branch of medicine was able to develop in the decade which followed World War II. In the intervening years the second generation has grown up in nuclear medicine. Some of them were still exposed to VON HEVESY'S influence, for instance, his address to the 1957 meeting of the Italian Society of Nuclear Medicine in Turin, or his Marie Curie Memorial Lecture at the Pittsburg meeting of the North American Society of Nuclear Medicine in 1961. Others again will remember that he helped to found the European Society of Nuclear Medicine in 1962-1963 and became its honorary president. It was VON HEVESY who, together with HEILMEYER, insisted that this be a completely open society, having neither national nor geographical attributes, its Europeanness being reflected in the variety of languages spoken at its congresses. Its members exhibited a similar variety, including in addition to those medically qualified -specialists in internal medicine, radiologists and laboratory research workers-physicists, chemists and engineers. A group of young second-generation scientists from eleven countries have dedicated these papers to the memory of the great pioneer of nuclear medicine. This book contains new results reported by doctors, physicists, chemists and computer specialists-results so far-ranging as to push the frontiers of nuclear medicine still further forward.