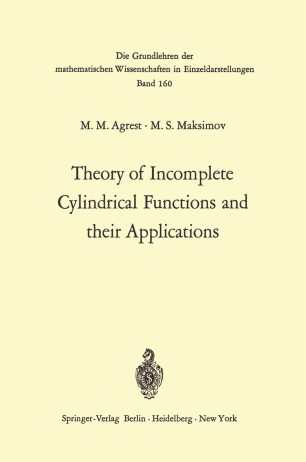 Theory of Incomplete Cylindrical Functions and their Applications

In preparing the English edition of this unique work, every effort has been made to obtain an easily read and lueid exposition of the material. This has frequently been done at the expense of a literal translation of the original text and it is felt that such liberties as have been taken with the author's language are justified in the interest of ease in readingo None of us pretends to be an authority in the Russian language, and we trust that the original intent of the authors has not been lost. The equations, whieh were for the most part taken verbatim from the original work, were eheeked only eursorily; obvious and previously noted errors have been eorreeted. Fortunately, the Russian and English mathematieal notations are generally in good agreement. An exeeption is the shortened abbreviations for the hyperbolie functions (e.g. sh for sinh), and the symbol Jm rather that Im to denote the imaginary part. As near as possible, these diserepaneies have been correeted. In preparing the Bibliography, works having an English equivalent have been translated into the English title, but in the text the referenee to the Russian work was retained, as it was impraetieal to attempt to find in eaeh ease the eorresponding eitation in the English edition. Authors' names and titles associated with purely Russian works have been transliterated as nearly as possible to the English equivalent, along with the equivalent English title of the work cited.