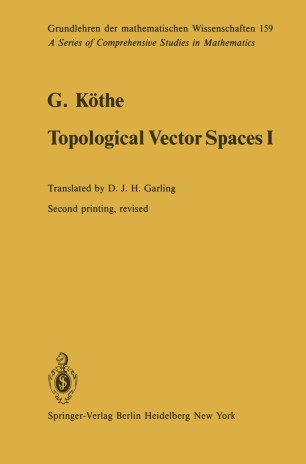 It is the author's aim to give a systematic account of the most im­ portant ideas, methods and results of the theory of topological vector spaces. After a rapid development during the last 15 years, this theory has now achieved a form which makes such an account seem both possible and desirable. This present first volume begins with the fundamental ideas of general topology. These are of crucial importance for the theory that follows, and so it seems necessary to give a concise account, giving complete proofs. This also has the advantage that the only preliminary knowledge required for reading this book is of classical analysis and set theory. In the second chapter, infinite dimensional linear algebra is considered in comparative detail. As a result, the concept of dual pair and linear topologies on vector spaces over arbitrary fields are intro­ duced in a natural way. It appears to the author to be of interest to follow the theory of these linearly topologised spaces quite far, since this theory can be developed in a way which closely resembles the theory of locally convex spaces. It should however be stressed that this part of chapter two is not needed for the comprehension of the later chapters. Chapter three is concerned with real and complex topological vector spaces. The classical results of Banach's theory are given here, as are fundamental results about convex sets in infinite dimensional spaces.