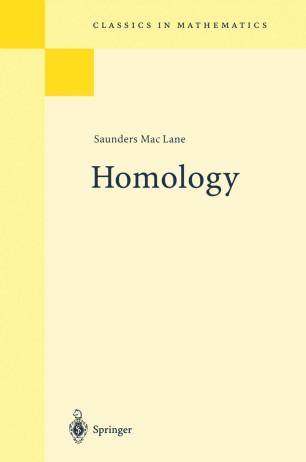 Part of the Classics in Mathematics book series (volume 114)

In presenting this treatment of homological algebra, it is a pleasure to acknowledge the help and encouragement which I have had from all sides. Homological algebra arose from many sources in algebra and topology. Decisive examples came from the study of group extensions and their factor sets, a subject I learned in joint work with OTTO SCHIL­ LING. A further development of homological ideas, with a view to their topological applications, came in my long collaboration with SAMUEL ElLENBERG; to both collaborators, especial thanks. For many years the Air Force Office of Scientific Research supported my research projects on various subjects now summarized here; it is a pleasure to acknowledge their lively understanding of basic science. Both REINHOLD BAER and JOSEF SCHMID read and commented on my entire manuscript; their advice has led to many improvements. ANDERS KOCK and JACQUES RIGUET have read the entire galley proof and caught many slips and obscurities. Among the others whose sug­ gestions have served me well, I note FRANK ADAMS, LOUIS AUSLANDER, WILFRED COCKCROFT, ALBRECHT DOLD, GEOFFREY HORROCKS, FRIED­ RICH KASCH, JOHANN LEICHT, ARUNAS LIULEVICIUS, JOHN MOORE, DIE­ TER PUPPE, JOSEPH YAO, and a number of my current students at the University of Chicago - not to m~ntion the auditors of my lectures at Chicago, Heidelberg, Bonn, Frankfurt, and Aarhus. My wife, DOROTHY, has cheerfully typed more versions of more chapters than she would like to count. Messrs.

Mac Lane's initial research was in logic and in algebraic number theory (valuation theory). With Samuel Eilenberg he published fifteen papers on algebraic topology. A number of them involved the initial steps in the cohomology of groups and in other aspects of homological algebra - as well as the discovery of category theory. His famous and undergraduate textbook Survey of modern algebra, written jointly with G. Birkhoff, has remained in print for over 50 years. Mac Lane is also the author of several other highly successful books.