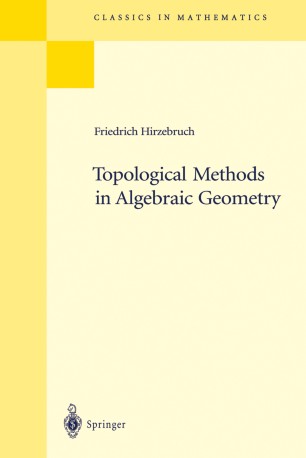 Reprint of the 1978 Edition

Part of the Classics in Mathematics book series (volume 131)

In recent years new topological methods, especially the theory of sheaves founded by J. LERAY, have been applied successfully to algebraic geometry and to the theory of functions of several complex variables. H. CARTAN and J. -P. SERRE have shown how fundamental theorems on holomorphically complete manifolds (STEIN manifolds) can be for­ mulated in terms of sheaf theory. These theorems imply many facts of function theory because the domains of holomorphy are holomorphically complete. They can also be applied to algebraic geometry because the complement of a hyperplane section of an algebraic manifold is holo­ morphically complete. J. -P. SERRE has obtained important results on algebraic manifolds by these and other methods. Recently many of his results have been proved for algebraic varieties defined over a field of arbitrary characteristic. K. KODAIRA and D. C. SPENCER have also applied sheaf theory to algebraic geometry with great success. Their methods differ from those of SERRE in that they use techniques from differential geometry (harmonic integrals etc. ) but do not make any use of the theory of STEIN manifolds. M. F. ATIYAH and W. V. D. HODGE have dealt successfully with problems on integrals of the second kind on algebraic manifolds with the help of sheaf theory. I was able to work together with K. KODAIRA and D. C. SPENCER during a stay at the Institute for Advanced Study at Princeton from 1952 to 1954.

Friedrich Hirzebruch was born on October 17, 1927 in Hamm, Germany. He studied mathematics at the University of Münster and the ETH Zürich, under Heinrich Behnke and Heinz Hopf.

Shortly after the award of his doctoral degree in 1950, he obtained an assistantship in Erlangen and then a membership at the Institute for Advanced Study, Princeton, followed by an assistant professorship at Princeton University. In 1956 he returned to Germany to a chair at the University of Bonn, which he held until his retirement in 1993. Since 1980 he has been the Director of the Max Planck Institute for Mathematics in Bonn.

Hirzebruch's work has been fundamental in combining topology, algebraic and differential geometry and number theory. It has had a deep and far-reaching influence on the work of many others, who have expanded and generalized his ideas. His most famous result is the theorem of Riemann-Roch-Hirzebruch.