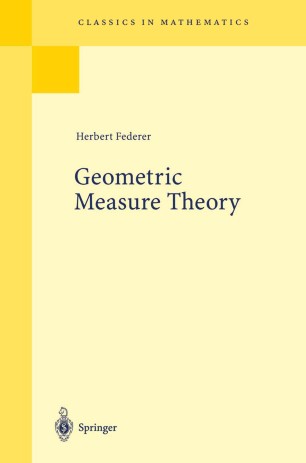 From the reviews: "... Federer's timely and beautiful book indeed fills the need for a comprehensive treatise on geometric measure theory, and his detailed exposition leads from the foundations of the theory to the most recent discoveries. ... The author writes with a distinctive style which is both natural and powerfully economical in treating a complicated subject. This book is a major treatise in mathematics and is essential in the working library of the modern analyst."
Bulletin of the London Mathematical Society

Herbert Federer was born on July 23, 1920, in Vienna. After emigrating to the US in 1938, he studied mathematics and physics at the University of California, Berkeley. Affiliated to Brown University, Providence since 1945, he is now Professor Emeritus there.
The major part of Professor Federer's scientific effort has been directed to the development of the subject of Geometric Measure Theory, with its roots and applications in classical geometry and analysis, yet in the functorial spirit of modern topology and algebra. His work includes more than thirty research papers published between 1943 and 1986, as well as this book.