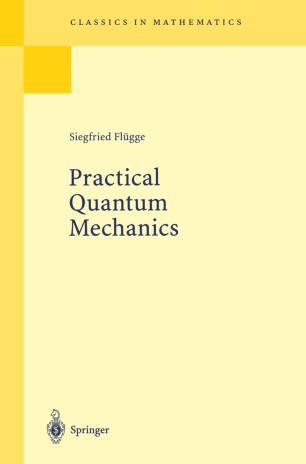 Part of the Classics in Mathematics book series (volume 177)

This work was first published in 1947 in German under the title "Re­ chenmethoden der Quantentheorie". It was meant to serve a double purpose: to help both, the student when first confronted with quantum mechanics and the experimental scientist, who has never before used it as a tool, to learn how to apply the general theory to practical problems of atomic physics. Since that early date, many excellent books have been written introducing into the general framework of the theory and thus indispensable to a deeper understanding. It seems, however, that the more practical side has been somewhat neglected, except, of course, for the flood of special monographs going into broad detail on rather restricted topics. In other words, an all-round introduction to the practical use of quantum mechanics seems, so far, not to exist and may still be helpful. It was in the hope of filling this gap that the author has fallen in with the publishers' wish to bring the earlier German editions up to date and to make the work more useful to the worldwide community of science students and scientists by writing the new edition in English. From the beginning there could be no doubt that the work had to be much enlarged. New approximation methods and other developments, especially in the field of scattering, had to be added. It seemed necessary to include relativistic quantum mechanics and to offer, at least, a glimpse of radiation theory as an example of wave field quantization.