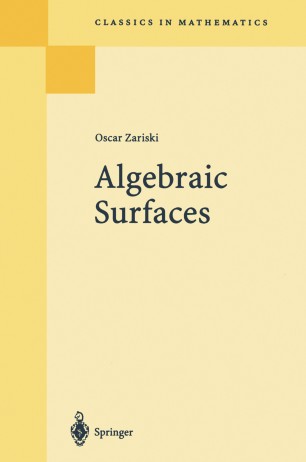 Part of the Classics in Mathematics book series (volume 61)

The aim of the present monograph is to give a systematic exposition of the theory of algebraic surfaces emphasizing the interrelations between the various aspects of the theory: algebro-geometric, topological and transcendental. To achieve this aim, and still remain inside the limits of the allotted space, it was necessary to confine the exposition to topics which are absolutely fundamental. The present work therefore makes no claim to completeness, but it does, however, cover most of the central points of the theory. A presentation of the theory of surfaces, to be effective at all, must above all give the typical methods of proof used in the theory and their underlying ideas. It is especially true of algebraic geometry that in this domain the methods employed are at least as important as the results. The author has therefore avoided, as much as possible, purely formal accounts of results. The proofs given are of necessity condensed, for reasons of space, but no attempt has been made to condense them beyond the point of intelligibility. In many instances, due to exigencies of simplicity and rigor, the proofs given in the text differ, to a greater or less extent, from the proofs given in the original papers.

Oscar Zariski (24.4.1899-4.7.1986) was born in Kobryn, Poland, and studied at the universities of Kiev and Rome. He held positions at Rome University, John Hopkins University, the University of Illinois and from 1947 at Harvard University.

"The author's book 'Algebraic surfaces' saw its first edition in 1935. By that time, the Italian school of algebraic geometers had brought the theory of algebraic surfaces, mainly with regard to its purely geometric aspects, to a remarkable stage of maturity. On the other hand, the topological and complex-analytic aspects had become a substantial part of the theory, essentially due to S. Lefschetz's contributions in the 1920s. However, for both directions, a solid base was still missing, and the new framework of abstract algebra was just at its beginning of being applied to algebraic geometry. The author's book was then a milestone in the history of the theory of algebraic surfaces, and even so in algebraic geometry as a whole. Namely, the author brought together the techniques of topology, analysis and classical algebraic geometry, in a coherent and rigorous way, thereby providing a solid foundation as well as a complete account of algebraic surface theory.
Now as before, the original text of the book is an excellent source for an interested reader to study the methods of classical algebraic geometry, and to find the great old results, stated here without requiring the knowledge of the modern, abstract (sheaf- and cohomology-theoretic) machinery of contemporary algebraic geometry. -- The second edition of the book under review appeared in 1971 enriched by updating appendices -- one for each chapter --, which were written by S.S. Abhyankar, J. Lipman, and D. Mumford. These ten appendices gave outlines of the developments of algebraic surface theory during the period from 1935 to 1970, connecting -- in this way -- Zariski's original classic text to the methods and results of abstract modern algebraic geometry.
Today, there is a vast literature on algebraic surface theory from the modern point of view, ... , but the classic text under review is still highly recommendable for reading, a linking piece between classical and modern algebraic geometry, and a timelessly beautiful pearl in the cultural heritage of mathematics as a whole. The present edition is an unchanged reprint of the second edition from 1971."
Zentralblatt MATH, 845 `
Buy options